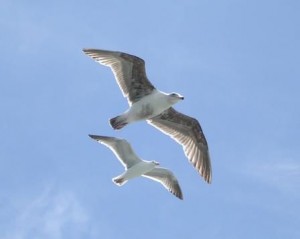 Richard Manning records a catalogue of horrors that the fracking boom has just begun to visit on the North Dakota ecosystem in his recent article for Harper’s Magazine, “Bakken Business: The price of North Dakota’s Fracking Boom.” A short anecdote about the effect boring into the Brakken with thousands of gallons of chemical laced water has on the eagle population stands out as particularly demoralizing amid other spectacles of environmental devastation. Manning explains,

Anne Marguerite Coyle is an eagle biologist, and just before the boom, she tagged eighteen juvenile golden eagles as part of a routine monitoring effort. All are now dead or gone. In one case, a drilling rig landed close to one of the eagles’ nesting sites, so when that bird disappeared she asked people nearby what had happened. ‘Oh, somebody shot that one,’ they said. (35-36)

This anecdote shows that the people working on the rig are as insensible to life and living things as the drilling machines they operate.  Beyond the comparison of humans to machines, in which the humans come off far worse, Manning also invites the audience to make a comparison between his anecdote and “The Rhyme of the Ancient Mariner.” I don’t think Manning wants to make a post-humanist intervention into readings of ST Coleridge’s poem, so much as remind readers that the guy who shot the Albatross is so chastened by his experience that he can’t shut-up about it long enough to enjoy a wedding. Unlike the Mariner, the shooting of the eagle in Manning’s account barely registered in the community.

Manning’s article generally, and the anecdote and citation specifically, calls into question the status of writing about nature in the face of impending environmental apocalypse. If the crisis can be averted, writing about the effects of 21st century industrialization, such as fracking in North Dakota, has to avoid polemic. One way for environmentalists to avoid remonstrations from drilling advocates might be to write, as Coleridge does, about the human and the animal as part of a single ecosystem. I wonder if telling the story of a man in North Dakota, who is unable to join in celebrations because he has been marked by the same senseless destruction of life as the Mariner, would effect positive change?